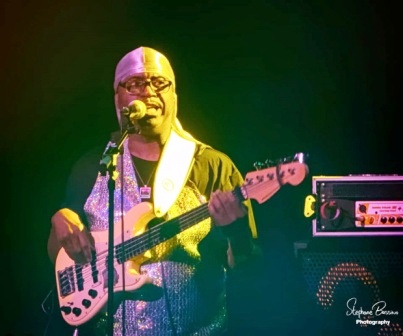 Recent weeks have seen the death of a number of soul, jazz and funk artists… most never major players – but each one has contributed in their own way to soul’s rich and varied archive.

It seems that Covid 19 claimed bass player SAMUEL “SANDY” ANDERSON.  New York’s Sandy Anderson (pictured above) will be best remembered as the bassist in 1980s band Unlimited Touch. The band, fronted by singers Audrey Wheeler and Stephanie James, enjoyed success with ‘I Hear Music in the Streets’ which was produced by Raymond Reid and William Anderson of Crown Heights Affair. After the band’s demise, the bassist continued to work with Reid and Anderson. His other sessions include work on France Joli’s ‘Gonna Get Over You’,  Odyssey’s ‘Inside Out’ and ‘All Nite’ –  a top-10  hit for Entouch featuring Keith Sweat.

Unlimited Touch recently reunited to record a new version of ‘I Hear Music in the Streets’ alongside a new song … both intended for producer Louie Vega’s upcoming ‘Expansions ‘ album. Interestingly, Sean “Puffy” Combs sampled Anderson’s ‘I Hear Music In The Streets’ bass lines on Faith Evans’ 1999 hit, ‘All Night Long’.

Though Covid 19 has not been mentioned, it’s also reported that Motown songwriter RONN MATLOCK (pictured above) has died. Born in Detroit, Matlock became one of Motown’s staff writers working with people like The Originals, Eddie Kendricks, and Bobby Taylor. After he left Motown, Ronn worked with producer Michael Stokes on some of the 70s recordings by Enchantment. He also enjoyed a solo singing career scoring minor hits with ‘I Can’t Forget About You’, ‘Working Man’, and ‘Take Me To The Top (Of Your Mountain)’. He also collaborated with Keith Barrow, Shirley Caesar, Merry Clayton, Millie Scott, Rick James, and Norman Whitfield.

It’s also reported that JAMES MAYS has passed. Mays was the bass singer in Texan soul harmony group the Van Dykes. The trio – lead singer Rondalis Tandy, Wenzon Mosley and Mays – enjoyed some success in the 60s. Their biggest successes were the 1964 ballad ‘No Man Is An Island’, ‘I’ve Got To Go On’ and the upbeat ‘Save My Love For a Rainy Day’. Often compared to the Temptations, lack of enduring success meant the group folded at the end of the 60s.

Mays is pictured at the right of our above picture.

FRANCIS FLYNN, who died in Philadelphia on 14th March aged 79, was another bass singer… his group were Sons of Robin Stone. Their biggest hits were ‘Got to Get You Back’, ‘Love is Just Around the Corner’, and ‘I Need it Bad’. In its Tom Mouton mix ‘Got to Get You Back’ was a huge club hit.

Interestingly, growing up in Philadelphia, Flynn was a class mate of Patti LaBelle.

PHIL PHILLIPS – a Southern soul man whose biggest hit was 1959’s ‘Sea Of Love’ – has died aged 94. Phillips began as a gospel singer before recording his iconic song which was issued by Mercury and went  to #2 on the pop charts and #1 on the R&B charts. Sadly, as was often the way, Phil made little money from the hit. He continued to work the Louisiana circuit through the 60s and enjoyed local success with songs like ‘Don’t Leave Me’ and ‘Nobody Knows and Nobody Cares’. In the 70s he moved from performing to become a popular local radio DJ – a role he enjoyed right into his 80s .