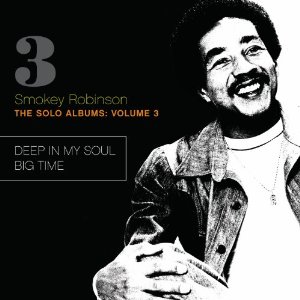 Universal/Hip-O Select continue their celebration of SMOKEY ROBINSON’S solo work with a third release that brings together the great man’s fifth and sixth albums without THE MIRACLES… January ’77’s ‘Deep In My Soul’ and June ’77’s ‘Big Time’ – the music to a movie that SMOKEY had financed, produced and acted in.

The eight tracks of ‘Deep In My Soul’ were recorded while the film was being made and SMOKEY couldn’t find the time to write any new songs, so he turned to Motown staffers like KATHY WAKEFIELD, and MICHAEL and BRENDA SUTTON. Between them they did a great job coming up with a set of tunes that could all have been ROBINSON originals. The delicious ‘There Will Come A Time’, in particular, is vintage SMOKEY and never mind that it copies the opening from ‘You Really Got A Hold On Me’, it’s still a beautiful piece of work. Other goodies include JEFFERY BOWEN’S ‘You Cannot Laugh Alone’ and the upbeat ‘Vitamin U’.

‘Big Time’ was a different affair. Inspired by BERRY GORDY’S film success, SMOKEY believed he could be a movie mogul too so he found what he thought was a decent comedy/crime caper script and resolved to film it using his own money. Sadly, the movie bombed with one critic writing “They don’t come more small time than ‘Big Time'”! Smokey lost a fortune and steadfastly refuses to talk about the project and he’s not even that enthusiastic about the music. The sound track, though, boasts some pretty ballads – notably ‘So Nice To Be With You’ and an energetic main title theme featuring some nifty guitar from WAH WAH WATSON.

Both albums are available here for the first time on CD and there’s a couple of bonus cuts – ‘Mother’s Son’ – which has only ever been out on the ‘Pops We Love You Album’… and the title cut to the LP, that, of course, was a tribute to BERRY GORDY’S father. The cut also features DIANA ROSS, STEVIE WONDER and MARVIN GAYE.

SMOKEY ROBINSON: The SOLO ALBUMS 3 is out on 21st FEBRUARY