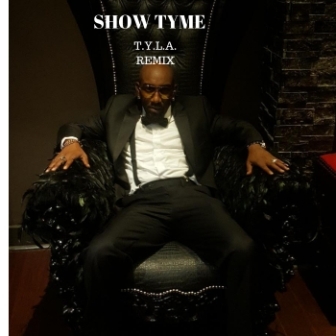 SHOW TYME (his spelling) is the musical alter ego of Trenton, New Jersey born LETHEL BROOKS Lethel started playing drums in his local church before moving on to providing BVs for a bevy of R&B and hip hop acts… and it was one of those acts, Case, that conferred on young Mr B the nickname “Show Tyme” – and that’s the moniker he used on his very well received long player, ‘Love Truth’.

Mr Tyme/Brooks has just released his latest single…. ‘T.Y.L.A.’ – which if you listen means “take your love away”. It’s a modern R&B beater – actually a remix (with a new abbreviated title) of one of the album tracks and it brings a fresh feel to proceedings – very summery.

As is the way there are two mixes of the cut – the “straight” one and one featuring guest rapper Pharoahe Monch with whom Lethel has worked before. The remix is out now on W.A.R. Media/Cold Rain and if you can, do yourself a little favour and check the parent album again…. the track ‘Change My Life’s particularly sweet – very old school! We love it!