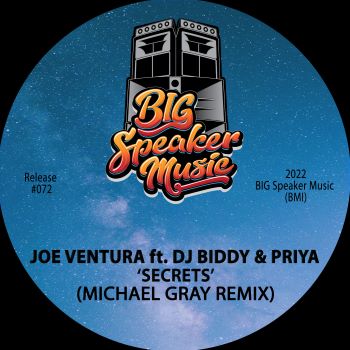 Back in February US house DJ, producer and remixer JOE VENTURA spilled the beans with a series of remixes of his tune ’Secrets’ . Featuring  DJ Biddy & Priya, the tweaks were all big, brash and ultra-tight!

Once again proving that it’s impossible to keep a good tune down, big Joe’s ‘Secrets’ returns in new mix from Michael Gray. Gray is an acclaimed UK Disco House producer and he tells us that he adored  ‘Secrets’ as soon as he heard the mixes and he knew he just had to have a stab at remixing it himself.

The results are with us soon (dates below) but previews reveal that Mr G retains all the charm, hypnotic insistence  and hooks of the original but adds a deep, chic and seductive vibe that just flows and flows behind Priya’s enchanting vocal.