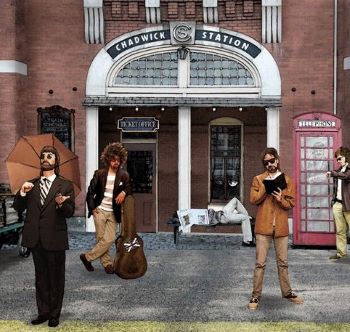 CHADWICK STATION is a British band built around the talents of Alvis Kensington – the lead singer and principal writer. The other boys in the band are keyboardist Ian Lancaster, bassist Curly Maddox, lead guitarist John Cotner and drummer Peter Tutt.

For reasons never best explained, the band relocated to Nashville several years ago though their sound certainly isn’t “country”. In fact, Chadwick Station are “big” on the Carolina Beach Music scene – where, the sound of choice is bright, brassy, breezy pop with a classy soulful undertow. The Chadwick’s Northern soul flavoured ‘Cryin’ Ain’t Gonna Win Her Back’ was a huge Beach Music hit!

The band are now gearing up to release a new single – a brash and brassy ‘Coming Back For More’ and there’s every chance that the tune will also be espoused by the Beach Music crowd – when and if, of course, they’re allowed to get out there! For the tune, the band’s sound is augmented by a swinging brass section that underline the song’s feel-good factor.