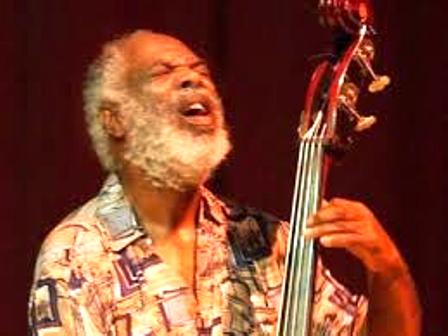 Celebrated jazz bassist CLEVELAND EATON died in Birmingham Alabama on Sunday July 5th. He was 80 and had been hospitalized for some time. Probably best known for his work with Ramsey Lewis and Count Basie, Eaton was also an acclaimed producer, arranger, composer, educator, publisher, and head of his own record company in Fairfield, Alabama, a suburb of Birmingham.

Proficient on piano, trumpet, and saxophone, the bass became Eaton’s instrument of choice and after college in Tennessee he  found plenty of session work with people like The Dells, Bobby Rush, Minnie Riperton, Jerry Butler, Rotary Connection, George Benson, Henry Mancini, Frank Sinatra, Billy Eckstine, Sarah Vaughan and Ella Fitzgerald. In 1966 he was drafted into the Ramsey Lewis Trio after drummer Isaac “Red” Holt and bassist Eldee Young quit. The trio’s new drummer was Maurice White! After ten years with Lewis, Eaton joined the Count Basie Band where he stayed off and on for 17 years. In 1974, he began performing and touring with his own group Cleve Eaton and Co. In September, 1978 Eaton released a disco track ’Bama Boogie Woogie’ which became popular on the UK club scene. In 2004 he renamed his group Cleve Eaton and the Alabama All Stars. Simultaneously he continued his session work and in 1996 he became a lecturer in the music department of the University of Alabama, Birmingham. Cleveland Eaton was an inductee of both Alabama Jazz Hall of Fame and the Alabama Music Hall of Fame.

Philly soulstress SHARON PAIGE also died on Sunday July 5th.  She was 67 and passed at her home in Southwest Philadelphia. Paige – born Sharon McCord — was raised in West Philadelphia and it’s reported that Gene McFadden discovered her when she was a student at Overbrook High School. He introduced her to Harold Melvin, who brought her to the attention of Gamble and Huff. She eventually became an ad hoc member Harold Melvin and the Blue Notes most famously duetting with Teddy Pendergrass on ‘Hope That We Can Be Together Soon’. She also featured on the Bluenotes’ songs ‘You Know How To Make Me Feel So Good’ and ‘I’m Searching For A Love’. Her own ‘New To You’ was a minor local hit. She stayed with music for a time despite her diabetes and she appeared occasionally with the Blue Notes through the late 2000s.

In a joint statement Kenny Gamble and Leon Huff said: “Sharon possessed one of the most unique female vocals that blended perfectly with the smooth singing and vocal prowess of Harold Melvin and Teddy Pendergrass. We really enjoyed recording Sharon with the group and felt she was a great asset.”