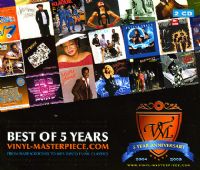 As any soul collector will know, the Dutch reissue company, Vinyl Masterpiece – which specialises in reissuing vintage ’80s albums on CD – has done a sterling job in putting collectable soul titles back in circulation. To celebrate the company’s fifth anniversary, they’re issuing a 2-CD compilation called ‘Best Of 5 Years.’ It’s an absolute corker of a set and contains 28 classic ’80s cuts cherry picked from Vinyl Masterpiece reissues and compilations. The artists featured include BB&Q Band, Starpoint, Oliver Cheatham, Luther Vandross, Lillo Thomas, Stephanie Mills, Gwen Guthrie, the UK’s own Total Contrast, Mtume, Evelyn ‘Champagne’ King, Klique, Val Young and Rene & Angela.
Vinyl Masterpiece is also reissuing for the first time ever, ‘Forever By Your Side,’ the 1983 album by the vocal group, THE MANHATTANS (the LP was originally released on Columbia and contains the hit single, ‘Crazy.)’
The Dutch duo, THE LIMIT – comprising Bernard Oattes and Rob Van Schaik – had both a UK and US hit in 1984 with ‘Say Yeah,’ featuring vocalist Gwen Guthrie and alto saxophone maestro, David Sanborn. The track can be found on the reissue of their eponymous debut album – originally released by the CBS imprint, Portrait – which is now reissued via Vinyl Masterpiece.

For more information go to: www.vinyl-masterpiece.com