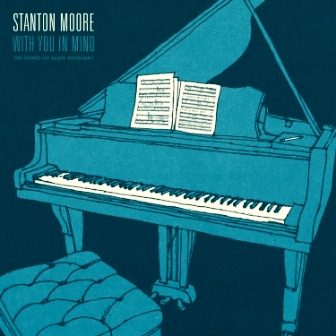 STANTON MOORE is a veteran of the New Orleans’ music scene. For almost 30 years now the drummer’s been the mainstay in Big Easy combo, Galactic while still finding time to play in a trio with David “Tork” Torkanowsky (keys) and James Singleton (bass).

Like all New Orleans’ musicians Moore, Torkanowsky and Singleton were deeply affected by the death of Allen Toussaint and soon after his passing in November 2015, they began working on a tribute album to the man everybody saw as the Godfather of the New Orleans soul and funk scene. Next month, the long player – ‘With You In Mind: The Songs of Allen Toussaint’ will be released on Cool Green Recordings / Mascot.

Moore tells us that the music on the album crosses effortlessly from funk to jazz and back and to help the players in that task, Moore has drafted in an A team of Crescent City musicians – amongst them Jolynda Kiki Chapman, Cyril Neville, Nicholas Payton, Donald Harrison, Trombone Shorty, Maceo Parker, and Wendell Pierce.

Payton and Harrison appear on two of the album’s instrumentals. The first is a version of ‘Java’, the 1958 instrumental Toussaint recorded on his first solo album (the all-instrumental The Wild Sounds of New Orleans by Tousan) that became a top-5 hit for Al Hirt in 1963. The other is ‘Riverboat,’ Toussaint’s 1960 record with Lee Dorsey. The album’s other key instrumental is the bitter/sweet ‘With You In Mind’ which gives the collection it’s titling.

Amongst the vocals there’s a version of ‘Here Comes The Girls’ with Cyril Neville on lead and a spoken treatment of ‘Southern Nights’ on which Wendel Pierce recites the lyric before Payton lays down first an organ solo then a trumpet feature.

Stanton Moore; With You In Mind: The Songs of Allen Toussaint;Released: 21st July 2017 via Cool Green Recordings / Mascot Label Group