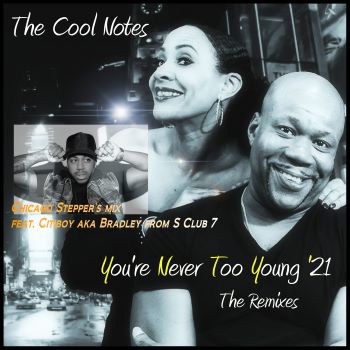 2021 has been a comeback year for THE COOL NOTES.  Now working as a modern soul trio/duo (Steve McIntosh and Heather Harewood as the faces/voices of the band with Joe Francis working alongside them in the studio), the Notes have enjoyed contemporary success with new takes on their tunes  ‘Spend The Night’ and ‘You’re Never Too Young’ .

Now maintaining the 2021 trajectory, the band have released two new mixes of ‘You’re Never Too Young’ – both aimed squarely at the steppers crowd. Now here’s the thing, to add real intrigue to the new versions Steve has drafted in his son  Bradley to spice things up. You might have  known (I didn’t) that young Brad (who works as “Citiboy”) was a member of S Club 7 – but don’t hold that against him… that was a while back!  Here he offers some positive rhyming, taking the song “From the eighties to the lately..” It all kind of works and it’s out now!