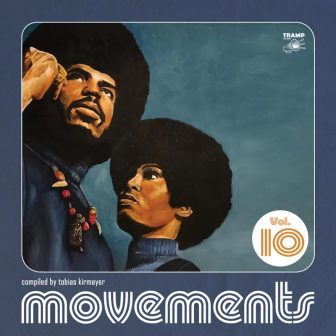 Germany’s TRAMP RECORDS are rightly known for their esoteric, rare soul and funk collections. Amongst their compilation series is a ‘Movements’ which has just reached its tenth edition and the 17 tracker is possibly the most interesting to date.

Amongst the many intriguing cuts is a sleazy, greasy jazz/soul version of ‘Coming Home Baby’ from Ronny Pellers Satin Sound, while jazz anoraks will recognize bassist Cleveland Eaton’s early band ‘The Kats’ with ‘Under The Covers’. While we’re name dropping, the cut was arranged a by a certain Donny Hathaway! There’s Latin soul a la Santana from Brazada (‘El Mexicano’) while you can also enjoy plenty of embryonic soul/R&B from the late 50s. Rarest groove on offer though is possibly Maxwell’s ‘Radiation Funk’… no not that Maxwell; rather a band who cut the blistering tune in 1979. Didn’t do too much then, but it’s now hugely in demand.

MOVEMENTS 10 is released on TRAMP RECORDS on 21st FEBRUARY