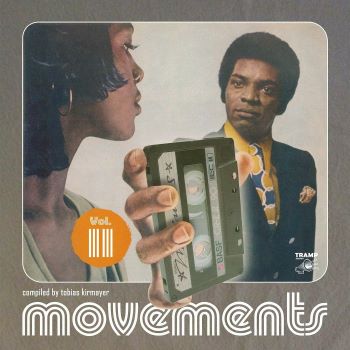 8th July sees German indie label issue volume 11 in their ‘Movements’ series. The series has been running for almost 18 years and the sleuths at Tramp can still dig out plenty that’s rare, eclectic and downright esoteric from the storied annals of soul, jazz and funk. None of the featured artists here are “big” names… indeed I’m guessing most won’t have heard of many of the performers but each one has contributed just a little something to Black Music history.

The album’s opening cuts are all vintage early 60s recordings like Macy and Company’s slinky cover of Tennessee Ernie Ford’s ‘Sixteen Tons’. Mod jazz is next up on the menu with music  from Rosie and Eddie, the Junkyard Angles and Phil Palumbo who offers a funky version of Lee Morgan’s ‘Sidewinder’. The vibes-led ‘Blue Jamaica’ from the Bill Beau Trio is another highlight. The collection ends with a selection of 70s funk from little knowns like Natural Riddum  and Harry Hann.

‘Movements 11’ is released on double vinyl (it’s a limited edition  with first 400 copies including a 7” single),  CD  and digitally. Great retro cover too! Find out more @ https://www.tramprecords.com/