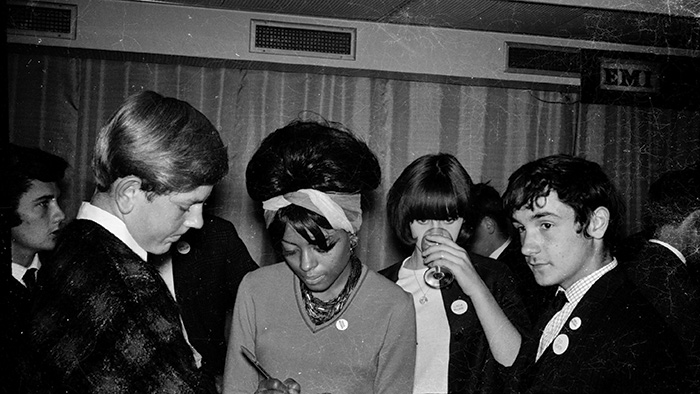 Way back in 1963 two R&B fans from Bexleyheath set out to bring the Sound of Motown to the attention of Britain’s teenagers, after they’d discovered the label a couple of years earlier. At the time the Detroit record company was hardly known outside of the United States and only a handful of their releases had been issued in the UK on labels like Fontana and Oriole.

The two fans were DAVE GODIN and CLIVE STONE who set up the UK’s first ever Tamla-Motown Appreciation Society. Never faint-hearted, Dave contacted Motown’s Berry Gordy, who was excited by this initial interest from England in his fledgling label, and invited Godin to Detroit for talks!

Imagining the fan base was a lot bigger than it turned out to be, Gordy quickly organized the first Motown tour of the UK in 1965 and with the aid of EMI started the Tamla-Motown label. Godin publicized the tour and kept UK fans up-to-date with all the Motown news, he also arranged informal meet-and-greets with the labels stars for the TMAS members, however other than a few devout Mods, the tour had very poor turnouts and was concluded to be a flop. Hard to believe, but true!

Forgotten about for over 50 years, a box was recently discovered in Clive’s loft containing an array of Motown-related ephemera and artefacts ranging from a novelty key to the Motor City to an autographed programme for the 1964 Motown Company Christmas party held at the Graystone Ballroom in Detroit, all dating from Clive’s days in the Tamla Motown Appreciation Society. There were also three Kodak photograph wallets and four folders of negatives in the bottom of the box, many of them covering that first tour of 1965. These unique photos had been briefly shown to family and friends at the time, with a few being given to Dave Godin for the fan club’s magazine, but were never actually published or have been seen since the day they left the developers.

Now In conjunction with ‘MODUS The House of Soul’ , the Horse Hospital in London’s Bloomsbury is presenting an exhibition of those unseen photos featuring the now big names of Motown playing and meeting fans in British pubs and small unlikely venues well before they became famous. Our picture (above) shows Diana Ross signing autographs for members in 1964. The photos feature alongside a whole host of supporting ephemera including a rare recording of personal messages by Motown stars to the society. The Exhibition will also see the launch Keith Rylatt’s book ‘Hitsville’ which chronicles the entire story from Stevie Wonder’s visit in 1963 through to the Four Tops’ sell-out show at London’s Saville Theatre in 1966 – credited as being the point when the Motown Sound finally entered Britain’s pop mainstream.

The exhibition takes place at the Horse Hospital in London’s Bloomsbury between 3 and 22 December.