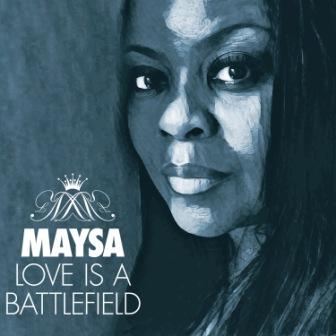 Fans of Ms MAYSA (Leak) will be delighted to know that the lady with one of the most beautiful and distinctive voices in all of soul is back with a new long player, set for release on May 26th

The set is ‘Love Is A Battlefield’ – named for the old Pat Benatar song which Maysa delivers in her own very special way. The cut that is winning all the plaudits on the limited pre-release promos is the lovely ballad, ”Inseparable’ (originally associated with Natalie Cole, of course) – if nothing else it proves that Ms Leak is still right at the top of her game.

Other key cuts on the album are covers of Baby Face’s Top 10 Tevin Campbell hit, ‘Can We Talk’, The Isley Brothers’ ‘Footsteps In the Dark’ and Luther Vandross’ ‘Because It’s Really Love.’ Surprisingly maybe Maysa also offers a version of Justin Bieber’s hit ‘As Long As You Love Me.’

MAYSA; ‘Love Is A Battlefield’ album released on Shanachie on May 26th