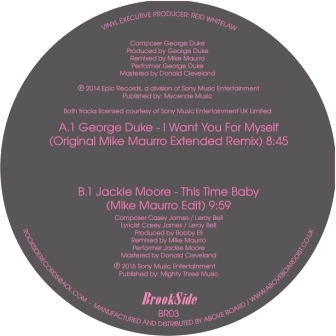 In any litany of master music mixers Brooklyn’s MIKE MAURRO would always be near the top of the list. He got into the crazy music biz in 1984, after watching the movie ‘Beat Street’, Mike was smitten by dance music and followed all the latest trends on New York City’s hottest radio stations. Via the radio Mike discovered DJ’s & producers such as Arthur Baker, John Robie, Afrika Bambaataa, John “Jellybean” Benitez, The Latin Rascals & “Little” Louie Vega and he soon determined to become a DJ himself.

By 1991, Mike owned his own DJ company and in ’92 he became the resident spinner at NYC’s Harbor Club and by the late 90s he was playing out at Studio 54’s Clubhouse. As late as 2010 he decided to try proper remixing after a meeting with the legendary Tom Moulton. From Mr M he learned that the best mixers let the original music do all the work for you. Pick the best parts, the catchy hooks, the memorable lines and extend and highlight them. Yes, let the magic of the original shine through.

Some of Mike’s best mixes were issued last year in a wonderful Harmless compilation ‘The Mike Maurro Peak Hour Remixes’. The quality of the album was such that it reached #1 on the Amazon chart and even charted nationally in the UK album chart.

Mike’s latest ‘Peak Hour’ mixes are being released in limited edition 12″ vinyl and just out is a double A sider from the Jones Girls that couples ‘Dance Turned Into Romance’ with an epic 11 minute version of ‘Nights Over Egypt’. There’s also a coupling of George Duke’s ‘I Want You For Myself’ and Jackie Moore’s ‘This Time Baby’.

Both discs will be released on Brookside on 14th October 2016 on 12 inch vinyl only.