MORE MAKIN’ YOU MINE 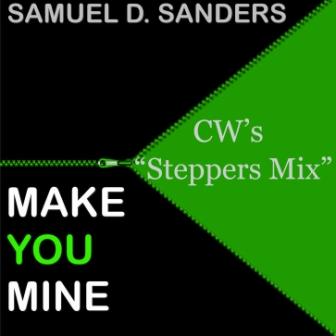 One of the year’s biggest modern soul tunes so far has been ‘Make You Mine’ from newcomer SAMUEL D SANDERS. The young singer/songwriter from South Carolina surprised many with his ability to nail the retro sound so popular on the “modern” soul circuit. Indeed, so catchy is ‘Make You Mine’ that it quickly became a mainstay on the scene and its longevity was guaranteed via an ultra-catchy Philly style remix.

The song’s many fans will be delighted to know that a brand new Steppers Style remix will be available from the end of March. This new “CW” tweak retains the retro element of the original and the garnish of Philly that the first remix brought to affairs and with the new, precise but rolling rhythms I can’t help thinking of the great Lou Rawls…. and that’s not a bad comparison to make for a new kid on the soul block!

SAMUEL D SANDERS MAKE YOU MINE… THE STEPPERS MIX will be available via DSG Records from March 30th.