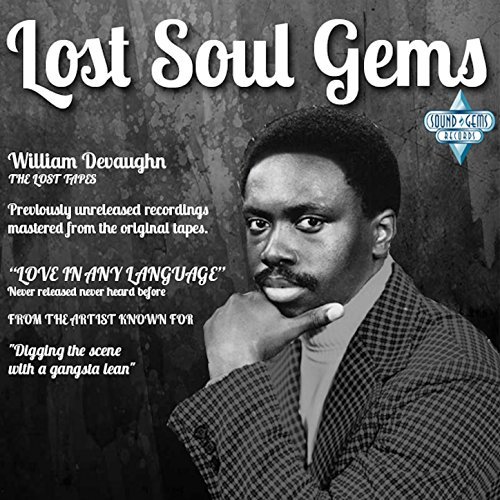 Philly collectors know that there was an awful lot more to the Philly soul scene than the Gamble/Huff empire. Like Detroit, the City of Brotherly love was a awash with indie labels all hoping to make the big time. One such Philly label was Sound Gems, set up in 1974 by Frank Fioravanti. The label’s biggest hit was the evergreen ‘Be Thankful For What You Got’ by William DeVaughn.

Back in 2014, the label reissued a lovely album ‘Lost Soul Gems’ – an 11 track anthology of ultra rare 70s Philly recordings from artists like Asia Luckey, Ebb Tide, Senjay Luckey, Spice, Al Brown Rhythm Band, Tommy McGee, The Charmetts, Crystal Motion, and Cache-A-Lux. The centre piece of the collection though was a brace of tracks from label main man, William DeVaughn ‘Staying Power’ and ‘Love Ballad Of The Year’, both proving that that there was much more to Mr DeVaughn that ‘Be Thankful’.

Sound Gems have just released another DeVaughn-centred album, ‘Love In Any Language’ named for a newly-discovered DeVaughn track. Again the tune is a soft soul delight begging the question as to why the singer wasn’t bigger. Most of the other cuts in the collection appeared on the first compilation so prospective buyers need to exercise caution to avoid duplication while the cover is very similar adding to the confusion about what is new and what isn’t. Still get over those hurdles, and you’ll enjoy a proper treasure trove of Philly delights… “soul gems” indeed.