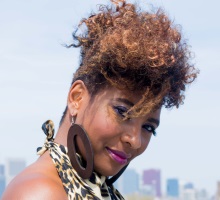 KENYA (JOHNSON) – rising star of the Chicago soul circuit – is putting the finishing touches to her debut long player, ‘My Own Skin’. The news is that the album will be released via Expansion Records in March 2015.

There’s already a buzz on the album on the back of the lead single – the neo soul/jazz cocktail that is ‘Wednesday Girl’… a mainstay on the playlists of the more discerning soul stations.

To give the tune more legs, there’s a great new remix on the way. The new tweak is called the ‘Knights Over Egypt’ remix and easy to hear why…. the bass line, you see, is nicked from the Jones Girls’ ‘Nights Over Egypt’ and what a lovely little concoction it all makes, topped with a great horn solo. The usual diligent internet search will lead you to it. We’re also told we can expect a great Opolopo remix in January… one to watch!