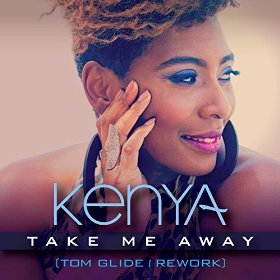 KENYA (JOHNSON) burst upon us last year with the delightful ‘My Own Skin’ long player from which a whole host of tunes made their way on to the modern soul circuit. One such tune was the ultra catchy ‘Take Me Away’… now lo and behold… it’s back with us again, this time courtesy of a TOM GLIDE remix.

Monsieur Glide, of course, remixed another of the album’s choice cuts…. ‘Makeusmile’, and now he turns the tight, modern soul beater that was the original ‘Take Me Away’ into an even tighter modern soul beater. It’s just a tad faster but equally infectious!

We’re told that the track is going to be part of an upcoming Kenya remix EP (due September) and in the meantime Ms K is working with Tom on his own new album which is due out in the summer. Right now, though, do yourself a favour and check out the new ‘Take Me Away’ remix at a download portal near you!