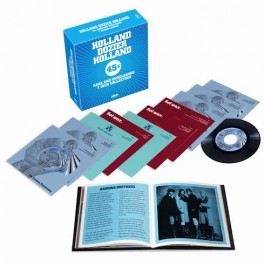 One of this year’s best archive soul collections was ‘Holland-Dozier-Holland: The Complete 45s Collection’. The set was released to celebrate the 45th anniversary of the mighty triumvirate’s labels – Invictus, Hot Wax and Music Merchant. Issuing label, Harmless were so pleased with reaction that in December they’ll be issuing a box set of rare H-D-H singles from the Invictus/Hot Wax/ Music Merchant era.

The set is succinctly titled ‘HOLLAND-DOZIER-HOLLAND: RARE 45S BOX SET’ and offers 10 x 7″ vinyl discs. Most of the music has never been released before; previously existing only in acetate or test pressing format.

The collection will feature tracks from the likes of Chairmen of the Board, the Barrino Brothers, Honey Cone and Eloise Laws and the whole project has the complete blessing of Holland, Dozier and Holland.

The box set features some very special bonus cuts too – Tom Moulton remixes of the vocal and instrumental versions of Chairmen Of The Board’s ‘Give Me Just A Little More Time’/’You’ve Got Me Dangling On A String’ and Freda Payne’s ‘Unhooked Generation’.