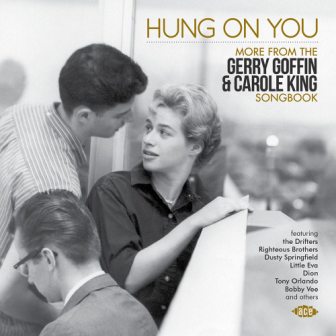 One of Ace Records most popular compilation series has been their ‘Songwriter Collections’. They’ve anthologised the work of most of the major names of the Golden Age of American popular music and naturally they’ve devoted a number of albums to the fabulous, evocative songs of GERRY GOFFIN and CAROLE KING. The Ace team have just issued a new 26 track album of the songs of the sometime husband and wife team and though it’s the fourth Ace Goffin/King set, the overall quality is as excellent as that of the previous three.

There’s plenty of collectable soul on the compilation. Amongst the soul cuts are Walter Jackson’s ‘Anything Can Happen’, Theola Kilgore’s ‘It’s Gonna Be Alright’ (a song better known in the Maxine Brown version), Freddie Scott’s ‘Where Does Love Go’, Little Eva’s ‘Please Hurt Me’ and the Drifters’ perennial ‘When My Little Girl Is Smiling’. Blue-eyed soul is represented by the Righteous Brothers (‘Hung On You’) and Dusty Springfield (‘That Old Sweet Rock N Roll’) and naturally there are lashings of great pop from artists like Bobby Vee, Tony Orlando, The Countrymen and The American Breed.

As ever with these collections you also get plenty to please the anoraks. Here the “oddity” is ‘The Boy From Chelsea’ by Truly Smith. Truly was actually Josephine Taylor a 16 year old from Warrington who had a brief stab at stardom in the mid-sixties. Sadly she failed and retired from music aged just 18!

‘HUNG ON YOU’ more from Gerry Goffin and Carole King is out now on Ace Records.