MORE FROM THE BRILL… 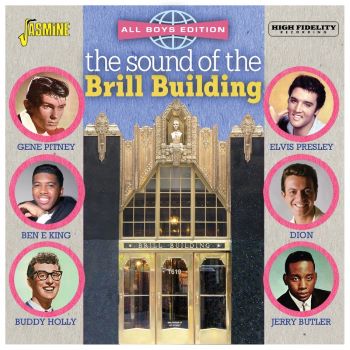 Budget reissue label, JASMINE continue their nostalgic exploration of the music that came from New York’s famed Brill Building in the early 60s with another superb compilation that covers all the  varied types of songs and productions that came out of  the art deco edifice at 1619 Broadway in that magical era. As with their previous Brill compilations, the featured songs come from the pens of people like Carole King, Gerry Goffin , Jerry Leiber, Mike Stoller, Doc Pomus, Mort Shuman, Burt Bacharach, Hal David and Neil Sedaka – all pop music icons. This  time around through, all the artists are male.

Amongst the generous 33 tracks there’s plenty of embryonic soul –  things like The Drifters’  ‘Save The Last Dance For Me’, Ben E King’s ‘Show Me The Way’, Chuck Jackson’s ‘I Keep Forgetting’  and Jerry Buter’s ‘Make It Easy On Yourself’. Rarer maybe are Marv Johnson’s 1962 United Artists outing, ‘Keep Tellin’ Yourself’ and Arthur Alexander’s ‘Where Have You Been’ – a song that was played out live by countless  Merseybeat groups  back in that Golden Age.

There is, of course, plenty of vintage early 60s pop. Heavily featured are Gene Pitney, Leroy Van Dyke, Buddy Holly, the Everly Brothers, the Crickets, Elvis Presley and Bobby Vee. Vee’s inclusion is ‘Walking With My Angel’. His most famous song, Goffin and King’s ‘Take Good Care Of My Baby’ is featured here in what is thought to be the original version, from Dion.

Being the early 60s there are plenty of novelty songs like The Diamonds’ ‘Ooby Dooby Doom’ and the good old Coasters with ‘Along Came Jones’. The early 60s was also known for the popularity of macabre songs – so here “enjoy” the “deathly” tale that is Kenny Karens’ ‘Susie Forgive Me’. All human life is here – and lot more. Recommended!