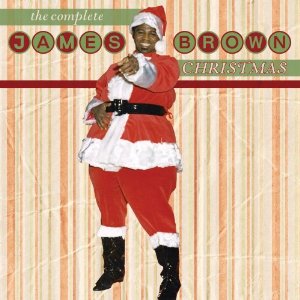 Just out is a funky festive collection from the late Godfather of Soul himself, JAMES BROWN. Entitled ‘The Complete James Brown Christmas Collection’ and released by reissue experts, Hip-O-Select.com, the 37-track 2-CD two set features three complete yuletide albums by Mr Dynamite: namely 1966’s ‘Christmas Songs,’1968’s ‘A Soulful Christmas’ – featuring the funk classic ‘Santa Claus Go Straight To The Ghetto’ and a long version of the non-festive, militant Black Power anthem, ‘Say It Loud – I’m Black And That I’m Proud’ – and 1970’s ‘Hey America,’ which was JB’s final Christmas long player until a yuletide album he released in 1999. As well as three complete albums, the double set features seven bonus tracks including a couple of previously unreleased songs. The music is accompanied by fascinating liner notes provided by ex-Brown staffer, Alan Leeds, in a photograph packed booklet. We at SJF firmly believe that the album is a sure-fire stocking filler.

Talking of Christmas albums, American jazz singer LEA DELARIA has just released a festive collection entitled ‘Be A Santa,’ which is available through Warner Jazz. Produced by acclaimed UK jazz pianist, Janette Mason, the set features sassy, swinging versions of Christmas classics like ‘Santa Claus Is Coming To Town,’ ‘Winter Wonderland,’ and ‘White Christmas.’ Interestingly the album also contains an original tune called ‘A Modern Christmas Tale.’ Says DeLaria: “It’s our Trojan Horse of a track. You listen to it and you think you’ve heard it before. You ask, ‘who wrote that one?’ Well, we did. We just snuck it in.”