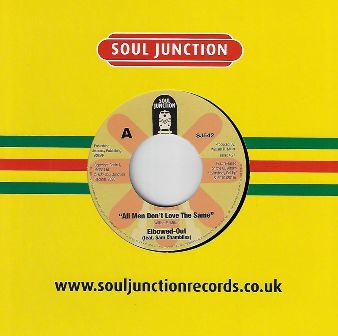 The oddly named ELBOWED OUT was a little known mixed race soul group from Seattle… “unknown” that is till UK reissue label SOUL JUNCTION records discovered them and with the release of couple  of singles and a CD album , Elbowed Out became something of a cult band – especially in Japan!

The band was formed in the early 70s by singer/guitarist Dennis Wilcox and singer/trumpeter Sam Chambliss and they soon found themselves a popular feature on the local Seattle club scene playing a set that consisted mainly of soul and jazz covers. They came to the attention of Detroit producer Bill Miller who had them record some tracks but because of the machinations of the US record biz, the cuts were never released. The Elbow boys continued gigging till they called it a day in 1991.

In 2012 Soul Junction were working on some reissues with the aforementioned Bill Miller who offered the label his Elbowed Out tracks. Two Soul Junction 7” singles and that CD followed and their success proved that record company execs don’t always get it right when picking tunes for releases. The soul crowd were amazed that such quality music had lain unreleased for so long and the CD has almost sold out!

So, those nice people at Soul Junction have decided to release a third Elbowed Out vinyl single offering two of the CD’s strongest cuts – the uplifting dancer ‘All Men Don’t Love The Same’ and the statelier, stepping-flavoured ‘Believe It’. Both feature gritty vocals from Sam Chambliss and the sound is a lovely mix of EWF, Tower Of Power and the Blackbyrds. Great stuff and good to go from August 17th. You can learn more @ www.souljunctionrecords.co.uk