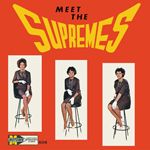 Universal’s specialist reissue arm, Hip-O Select, is about to put back four classic soul and funk albums into circulation.
First up is an expanded 2-CD version of ‘Meet The Supremes,’ the 1962 debut Motown album from THE SUPREMES. The package includes both mono and stereo mixes of the album plus the added bonus of two never-before-released concerts – the first was recorded at the Apollo Theatre in ’62 (the earliest known live recording of the trio) while the second is a show from 1964 recorded at Detroit’s Graystone Ballroom. But that’s not all, folks – also included is a whopping 16 additional studio tracks that include rare and collectable unreleased alternate takes and previously unheard stereo mixes. So, then, a bumper, must-have set for Supremes’ fans.
Following in the wake of the critically-acclaimed recent BARRY WHITE box set, Hip-O Select are reissuing the deep-voiced Love God’s debut long player from 1973, ‘I’ve Got So Much Love To Give.’ Originally released on the 20th Century label and featuring lush symphonic arrangements from maestro Gene Page, it was the set that catapulted the LA singer-songwriter into the big time. It included his debut smash ‘I’m Gonna Love You Just A Little More, Baby.’ Two bonus tracks have been appended to the original album: rare instrumental mixes of ‘Just A Little More, Baby,’ and ‘I’ve Got So Much Love To Give.’
Finally, two RICK JAMES albums are reissued on CD for the first time – the King of punk-funk’s third Motown platter, ‘Fire It Up,’ from 1979 (including the hit ‘Love Gun’) and his 1980 album, ‘Garden Of Love.’ As a bonus, the former album includes a promotional 12-inch mix of ‘Love Gun,’ while ‘Garden Of Love’ is appended with two previously unheard cuts: an extended mix of ‘Big Time’ and a demo version of ‘Gypsy Girl.’
For more info go to http://www.hip-oselect.com/default.asp