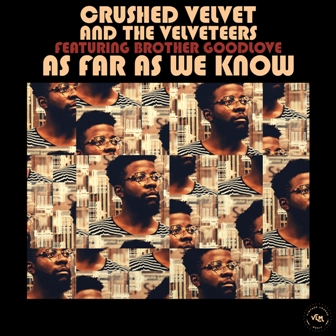 In June we highlighted a lovely single from the oddly named CRUSHED VELVET & THE VELVETEERS. We discovered that the “band” was yet another alter ego for multi-instrumentalist/songwriter/studio engineer and producer ALAN EVANS. (yes, he of Soulive, 1/3 of the Alan Evans Trio, and half of The 7 Day Weekend). That single was a crunchy slab of contemporary funk… ‘Good Thang’ featuring a big vocal from Kim Dawson.

The Velveteers are now set to release a follow up – the very different, much more gentle but no less soulful ‘As Far As We Know’ which has Brother Goodlove on  lead vocals. It’s an emotional affair with Evans on bass, drums and guitar. Goodlove is a new name to us but we’ve learned that he was born in Montreal to Cameroonian parents and now resides in Washington DC and hopefully we’ll hear more from him on the Velveteers’ upcoming album ‘Vintage League Music’.