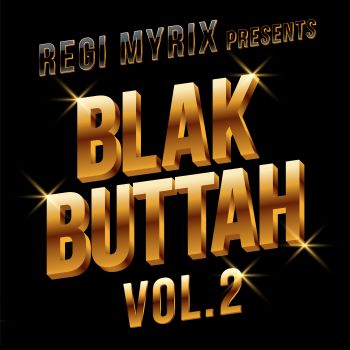 Busy soul music entrepreneur REGI MYRIX won plenty of acclaim with his 2019 mini album ‘BLAK BUTTAH VOL. 1’. It offered all kinds of contemporary soul flavours with the tunes  getting most spins being the Noel Gourdon vocalised ‘Lovin’ Up’ and the ultra-catchy ‘Step Into Love’.

The collection’s title suggested that there was more to come and good old Reg  via his  Myrix Media Group has just launched ‘BLAK BUTTAH VOL. 2’. This new collaboration between the writer/producer and some top soul names offers a full ten tracks and amongst the many highlights is – wait for it – ‘Step Into Love’. Yep, the same song, but this time given an irresistible mew mix courtesy of the seemingly omnipresent Nigel Lowis. No complaints about that – as ever Nige does a great job. Without too much fuss or ostentation, he just seems to know what’s needed to craft a catchy, retro flavoured contemporary soul groove.

‘Blak Buttah 2’ features a number of other tunes that will be familiar to modern soul collectors – things like the Nia Simmons vocalised ‘Relax’, ‘Remain Friends’ (feat. NexxUp)  and two from Hil St Soul – ‘One Life’ – here given another Lowis make over, stretching its loveliness to almost seven minutes and ‘In My Groove’ (yes – you’ve guessed – in a new Nigel Lowis mix!)

Of the fresh material, ‘It’s A Vibe’ has the potential to be a big tune. Ty Juan takes lead here and he’s also at the mic for ‘Come Back’, ‘Super Powers’ and ‘The One’. While the album opens with a newie – a sensual  intro featuring Regi in tandem with Lina.

Some soul commentators are saying ‘Blak Buttah 2’ is Regi’s best and  most consistent collection to date while he himself says: “’Blak Buttah Vol. 2’ is an eclectic combination of pure genius, sexy soul, and 10 songs that showcase R&B magic at its best” See if you agree by investigating at your favourite download/streaming platform.