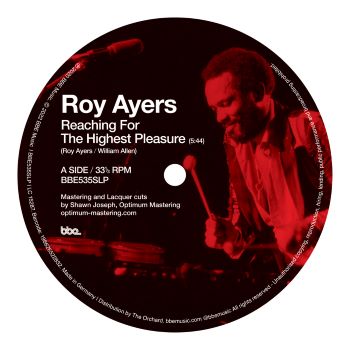 Back in 2020 bbe Music released a real treat for fans of ROY AYERS. Amongst the tapes from the vibe man’s ‘Virgin Ubiquity’ studio sessions they found a previously unreleased gem… a soulful ‘Reaching The Highest Pleasure’. The track was recorded in June 1977 and though a version of the song had been released, the bbe discovery featured a never before heard take that featured an extended vibraphone solo from the maestro. The digital release was lapped up by Roy’s fans and was  followed by a release of more ‘Virgin Ubiquity’ grooves.

The bbe team have told us that there was such interest in the track that they have decided to release it on a very special 10” vinyl disc, the first time ever for the tune on that medium. The disc’s flip side will be ‘I Am Your Mind part 2’ – a tune which first appeared on the original ‘Virgin Ubiquity’ compilation. It features a female vocal as well as Roy’s spoken word philosophies laid over a deep and infectious groove. The mix comes courtesy of Parisian producer Pépé Bradock AKA Julien Auger.

Both tracks come from what many regard as Mr A’s peak creative period and with vinyl pressing plant issues bbe are anticipating an October release… this advance notice is to get pre-orders in so that Ayers’ completists aren’t disappointed. Learn  more @ https://bbemusic.com/