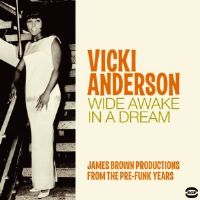 Renowned for the superlative quality of its compilation packages, Ace Records has just unleashed a new batch of titles that should find favour with soul music collectors.
First up is a fascinating VICKI ANDERSON collection on Ace’s BGP imprint called ‘Wide Awake In A Dream,’ which focuses on the James Brown protégé’s pre-funk years, spanning the period 1965-1970. There are 23 tracks in all – the majority of which are helmed by Soul Brother Number One – and which appeared on the Smash, Fontana, Deluxe and King labels. The set includes duets with James Brown and Anderson’s husband, Bobby Byrd, and also includes a previously unissued track.
Also look out for a superb collection devoted to the histrionic church-raised singer, FREDDIE HUGHES. ‘Send My Baby Back’ features the1968 Wand album of the same name (the first time it’s ever had a bona fide reissue) and is bolstered by a slew of bonus cuts (14 in all), which include sides Hughes cut with The Soul Brothers.
Finally, Ace’s Kent imprint unleashes a third instalment in their CD chronicle of obscure Memphis soul. ‘Steppin’ Stone: The XL & Sounds Of Memphis Story Volume 3′ boasts 22 tracks, ranging from Willie Walker’s ‘If You Never See Me’ to George Jackson’s ‘How Can I Get Next To You’ and including rare sides by Erma Shaw, Louis Williams, The Minits, Dan Greer and The Jacksonians.

Look out for reviews soon at www.soulandjazzandfunk.com.