MONK GETS THE FUNK! 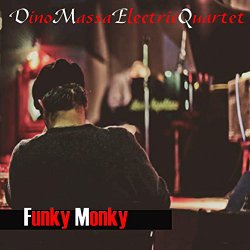 ‘Funky Monky’ is the new album from Italian keyboardist DINO MASSA and the (not mis-spelt) title gives you a clue as to what you can expect. The 10 tracker is a funk homage to Thelonius Monk! Dino and his band – Rocco Di Maiolo (saxes), Dario Spinelli (electric bass) and Nicloa De Luca (drums) – give a great new twist on Monk favourites like ‘Round Midnight’, ‘Criss Cross’, ‘In Walked Bud’, ‘Ruby My Dear’ and ‘Monk’s Dream’ – one of the album highlights. In truth the music they craft throughout is more soul-jazz than pure funk but it does throw new light on old jazz favourites.

Massa is a veteran of the Italian jazz scene. he graduated from the Naples Conservatory in 1984 and has played all over the world and ‘Funky Monky’ is his ninth (and most ambitious) album.