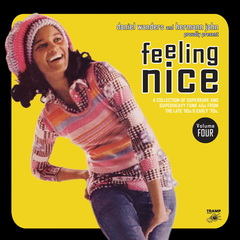 Germany’s TRAMP RECORDS are set to release the fourth volume in the series ‘Feeling Nice’. Like the previous three instalments, this new 17 tracker is stuffed with rare and esoteric, hard-hitting US soul and funk. The sound is best typified by the TNT Powerhouse’s ‘Basement Jam’ or Donnie Saunders’ ‘Shing A Ling Baby’. Then there’s the wild ‘It Ain’t What You Do’ from the wonderfully named Little Caesar and Euterpeans… this music ain’t for the faint hearted!

FEELING NICE 4 is released on Tramp on November 3rd and comes digitally, on CD and on vinyl, double LP. As a bonus the first 400 LPs come with an acetate of ‘I Feel A Groove Comin’ On’ by South Side.