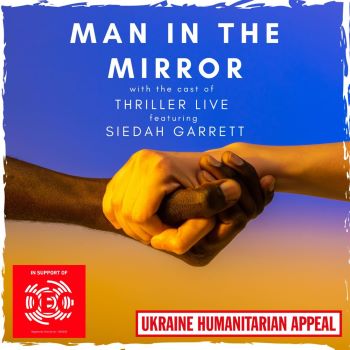 No matter what you think of Michael Jackson, you’ll surely agree that his ‘Man In The Mirror’ is a great tune – lyrically and sonically.

Now over 30 years since its release, the song’s back with us in a very special new version which features vocal input from cult soul diva and the song’s co-writer SIEDAH GARRETT.

The song, of course, features in the West End show ‘Thriller’ and this recording features the show’s cast with Ms Garrett sharing vocals with John Moabi.

Between them all they create a version that is faithful to the original incarnation but the important thing is that proceeds from the recording will go to aid Ukrainian Refugees. And remember there are something like 13 million who have fled to escape the outrages of Putin. Siedah says: “When Glen Ballard and I wrote the song ‘Man In The Mirror’ for Michael Jackson, we had no idea that it would become such an important anthem, to inspire people the world over, encouraging each one of us to make this world a better place, starting with ourselves. That’s why I’m so excited to join the cast members of the hit musical ‘Thriller Live’ in performing a new version of the song to help raise funds for those courageous refugees in the war in Ukraine. Our hearts go out to you.”

This new ‘Man In The Mirror is out now via Soul Train Records.