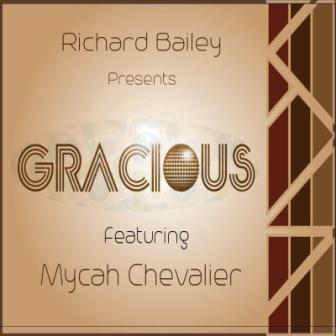 RICHARD BAILEY is a soul/gospel muso who’s currently winning airplay and plaudits with his latest single – the urgent, uplifting ‘Gracious’.

Originally from Leeds, young Richard cut his teeth in church gospel choirs and for a time experimented with infusing hip-hop and rap into his work. Then in 2014 he made contact with super soul vocalist Laura Jackson hot off her work with Cool Million. Ms Jackson introduced Richard to the Cool Million boys and they did some remixes on some of his inspirational tunes. However, it’s Mr B’s latest outing, ‘Gracious’ that’s making waves.

He tells us that the song is all about how Gods Grace (or love) is unconditional and no matter how we may fail God he is forgiving and able to give more and more grace which is unconditional and free! Of course, it’s up to you to believe or not and Richard would be the first to acknowledge that that’s your right; however, even non-believers won’t fail to be moved by the optimism and soul feel of the cut.

Vocalist on the track is jazz singer Mycah Chevalier and bvs come courtesy of Sydnie Marie and Gwendolyn Collins and between them there’s some powerful testifying going on.

RICHARD BAILEY’S ‘GRACIOUS’ will be available from Feb. 24th.