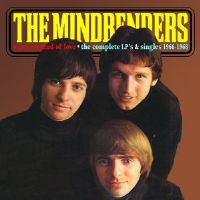 60s collectors and lovers of cover versions need to know that the Cherry Red imprint RPM have just released a wonderful double CD, 37 track album on Manchester beat group THE MINDBENDERS. The band backed WAYNE FONTANA on his hit cover version of MAJOR LANCE’S ‘Um, Um, Um, Um, Um, Um’ and when he quit them for relative solo obscurity, the trio carried on – scoring a massive hit with their version of ‘A Groovy Kind of Love’. This album collects together all the group’s recordings and as was the way with 60s beatsters there’s a real wealth of soul covers. Songs featured include typical 60s versions of ‘One Fine Day’, ‘The Way You Do The Things You Do’, ‘Just A Little Bit’, ‘Don’t Cry No More’, ‘A Little Piece Of leather’ and ‘Shotgun’. MINDBENDERS’ guitarist/vocalist ERIC STEWART, of course, went on to form 10CC and on some of the cuts you can clearly hear the roots of that quirky band’s sound. ‘THE MINDBENDERS – A GROOVY KIND OF LOVE, THE COMPLETE LPs and SINGLES’ is out now.