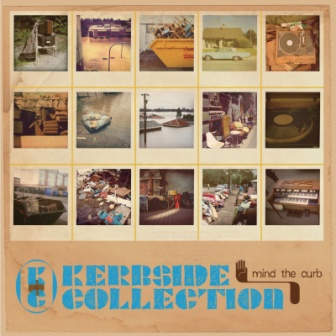 Aussie soul and funk has never been stronger and the latest outfit to emerge from down under are a gritty four piece by the name of KERBSIDE COLLECTION. RAVI WELSH (guitar), JASON BELL (drums), CHRIS POULSEN (Hammond and Fender) and JEREMY O’CONNOR (Bass) came together in May 2011 after their hometown of Brisbane was ripped apart by floods. They shared a mutual passion for 60s and 70s American music – particularly the soul-jazz of people like WES MONTGOMERY, JIMMY SMITH, pre-‘Breezing’ GEORGE BENSON, CHICO HAMILTON and the work of THE CRUSADERS.

Their debut album ‘Mind The Curb’ was recorded in Melbourne with JAKE MASON (COOKIN’ ON 3 BURNERS) at the desk. They cut the 8 tracks in just four days on vintage analogue equipment to ensure a live, organic sound… and they’ve certainly achieved it. Their music is as “authentic” as it comes. Spirited and lively, it recreates that magical atmosphere of the era that the quartet respect so much. Try the band’s own ‘Jelly Belly’ to hear what I mean.

The album is now available on Légére Records and amongst the highlights are a rough-hewn version of DIZZY GILLESPIE’S ‘Night In Tunisia’, a JACKIE MITTOO-influenced original called ‘Red Stripe’ and a great, cover of an old GEORGE BENSON tune, ‘P Park’. The set also boasts a couple of remixes – one a lively tweak of the aforementioned ‘Red Stripe’ … a great Summer vibe.