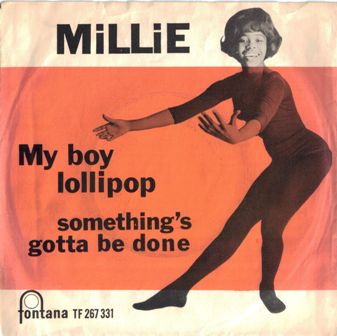 Jamaican singer MILLIE SMALL has died. She was 73 and had suffered a stroke. She is, of course, most famous for her smash 1964 ‘My Boy Lollipop’… a no.2 hit in the UK and the US and arguably the biggest selling ska song of all time!

Born Millicent Small in Clarendon, south Jamaica, she was one of seven brothers and five sisters, raised on the sugar plantation where her father was an overseer. Aged 12 she won a talent show and was soon recording for producer Sir Coxone Dodd at Studio One. Island Records’ links to Jamaica, led to boss man Chris Blackwell bringing Millie to London in 1963 where he enrolled her into the famed Italia Conti Stage School. Her first UK record was ‘My Boy Lollipop’ which became a worldwide hit. On the back of the hit, Millie won a part in a TV drama while ‘Lollipop’s’ follow up, ‘Sweet William’ was only a minor hit.  Despite that she continued to record moving to Trojan Records in 1970. With limited success she drifted away from music and in later years she lived in Singapore and New Zealand before returning to London, where she concentrated on writing and painting.  In 2011, Jamaica’s Governor-General made Small a Commander in the Order of Distinction for her contribution to the Jamaican music industry.

The singer is survived by her daughter, Joan, who is also a musician based in London performing under the name Jaelee Small. Interestingly in a 1987 interview Millie revealed that after her recording career had faded she became a London rough sleeper.