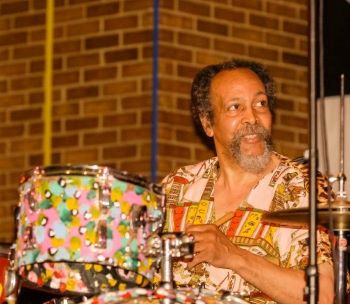 Acclaimed jazz drummer MILFORD GRAVES died on Friday 12th February. He was 79 and suffered from congestive heart failure prior to his death.

Graves was born in the Jamaica district of NY’s Queens in 1941 and began drumming from an early age. By the early 60s, inspired by Elvin Jones, he was playing in New York dance bands   and working with people like Herbie Mann, Cal Tjader and the recently deceased Chick Corea.  In 1964 he joined the New York Art Quartet then fronted by trombonist Roswell Rudd and sax man John Tchicai. With the quartet, Graves developed a unique style of drumming – a sort of free jazz which he said liberated percussion from simple timekeeping.   Rudd said that Graves’ playing was “like an anti-gravity vortex, in which you could either float or fly depending on your impulse”.

Over the next fifty years or so Graves played with numerous ensembles as well as studying drum styles and techniques from other cultures. His interest in international cultures led him to invent Yara, a martial art form. Conceived in the early 1970s, Yara was inspired by African ritual dance, the praying mantis and the Lindy Hop dance style.

Graves became a noted academic during the 1970s and taught at Bennington College’s Black Music Division for 39 years. He was a Professor Emeritus at the institution prior to his death.

As an academic, Graves engaged in extensive research into the human heart, and its relationship with the heading powers of music. Prophetically in 2020 he said: “It turns out, I was studying the heart to prepare for treating myself”.

Apart from his musical and academic achievements, Graves was also an inventor, a visual artist, a noted gardener and herbalist. Saxophonist John Zorn described him as “basically a 20th-century shaman”.