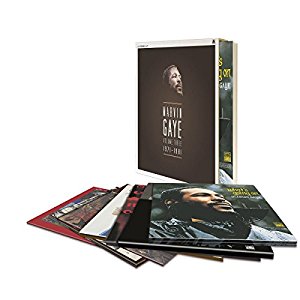 Just a timely reminder that it’s 45 years since the release of MARVIN GAYE’S ‘What’s Going On’ album and to commemorate the event, throughout the year , Universal/Motown have been releasing some great Gaye sets.

Back in May, they issued a seven LP box set spanning the great man’s output between 1971 and 1981. More recently they put out another new box set. This packaged together all of Marvin’s long players that were issued between 1966 and 1970. Included are the great ‘Take Two’ album with Kim Weston and two sets with Tammi Terrell.

Collectors may be more interested in a special 10″ vinyl EP which features the original single mix of ‘What’s Going On’ alongside ‘God Is Love’. The B side offers two new recordings under the collective title ‘Motown Re-Imagined’. They are remixed versions of ‘What’s Going On’. One is an “unplugged” ‘Coffee House’ mix while the other sees BJ, The Chicago Kid “dueting” with Marvin on the epoch defining song.