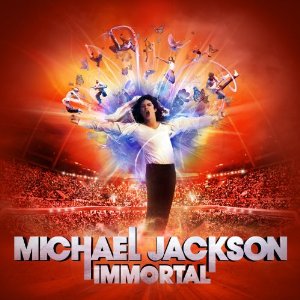 The never-ending story that is MICHAEL JACKSON rolls on as the singer’s estate collaborates with Epic Records for another “new” album. This time around MJ’s music gets the famed CIRQUE DU SOLEIL treatment. The Quebec-based organization stages spectacular music/multi-media/dance extravaganzas that incorporate circus skills, massive light shows and much, much more, and after wowing audiences in Las Vegas for several years, CIRQUE DU SOLEIL now presents 22 shows all over the world.

One of their most famous shows was based around the music of THE BEATLES and the subsequent FAB FOUR album, ‘Love’ (produced by SIR GEORGE MARTIN and his son, GILES) became a best seller.

That success has inspired the organization to work on the music of MICHAEL JACKSON and the result is not only a show but the new album ‘Immortal’. The album comes in both a de-luxe double disc version and as a single CD, and it sees musical designer KEVIN ANTUNES take a fresh, creative approach to redesigning more than 40 of MJ’s best tunes. It’s taken ANTUNES over a year to create what he calls “a powerful tapestry that will allow listeners to enjoy a new soundscape”.

You can find out more @ www.MichaelJackson.com