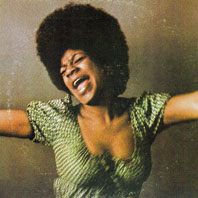 Just a couple of days ago MERRY CLAYTON’S website posted the following message: – “It is with deep regret, but also deep gratitude, that we announce the following about our beloved Merry Clayton. At approximately 3:30 p.m. Monday, June 16, 2014, Merry was involved in a major automobile accident in Los Angeles, California. Merry sustained severe injuries to her lower body, including major trauma to her lower extremities. We are truly grateful that our dear Merry is still with us. She has a long road of recovery ahead and we thank you all for your prayers as we link arms together with faith and the Lord’s strength for her rapid healing. For all that know her personally, and those that have been blessed by her God-given talents, please know that her spirit is very strong and her faith unwavering. Her voice is not silenced and His praises continue to be on her lips.”

Indeed after working with the Stones in 1970 she decided to record her own version of their ‘Gimme Shelter,’ and it became the title track of her debut solo album, released that year. Her version would be the first of five singles under her name to enter the Billboard Hot 100, reaching #73. In the mid 1970s, she sang on The Blackbyrds’ R&B hit ‘Rock Creek Park’ and she continued to release solo albums throughout the next decade