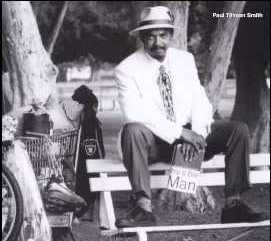 Oakland’s PAUL TILLMAN SMITH is not one of modern soul big “names”, but the drummer/percussionist has been in the business for almost four decades and in that time he’s created some quite beautiful music that deserves a larger audience and as items from his back catalogue are now being reissued and re-promoted, the time is right to get to know Paul Tillman Smith a whole lot better!

First a little history. In his career Paul has led several bands including Vitamin E, Bridge and Park Place. He’s also the founding Board member of the “Bay Area Jazz Society” a non-profit music charity and the co-founder & Artistic Director of the Berkeley Juneteenth Festival, the longest running African American Music and Arts festival in Northern California history.

To offer an overview of his career, back in 2013 Mr. Tillman Smith released the retrospective album ‘Bed Ballads’ credited to ‘Park Place Presents Paul Tillman Smith’. The long player brought together his best performances from his forty year career and amongst the vocalists on the album are dear Phyllis Hyman (on ‘As You Are’) and Lenny Williams (whose ‘Invisible man’ is one of his very best). Want more? Well the musicians number people like Pharaoh Sanders, the Brecker Brothers, Jon Faddis, James Gadson, Mtume, Bobby Lyles, Wah Wah Watson and David T. Walker. The producer, by the way, is someone called Norman Connors! ‘Bed Ballads’ is a wonderful piece of work and so aptly named! Indeed ‘Bed Ballads’ is like a Norman Connors’ set for the 21st century!

Paul’s newest album is the equally excellent ‘A Beautiful Heart’ and the album’s title track offers a link to ‘Bed Ballads’. The song featured on that album too but here it’s given a very different treatment – tough and funky with vocals from American Idol finalist LaToya London. There’s input on it from Rosie Gaines too and she’s involved in another cut – a remix of the sweet ‘Summer Sky’. Other vocalists include Skyler Jet and Donnie Williams (another American Idol finalist). Amongst other cuts, Donnie features on the gospel tune ‘Precious Song’ (another re-recorded item from, ‘Bed Ballads’) and it’s just one of countless highlights. Indeed there’s just so much good on ‘A Beautiful Heart’ and ‘Bed Ballads’ that’s it’s impossible to cherry pick highlights.

Just know that both are currently available via your favourite outlet (digital or real) and they’re both a must for investigation that is if you really care about proper modern soul music!