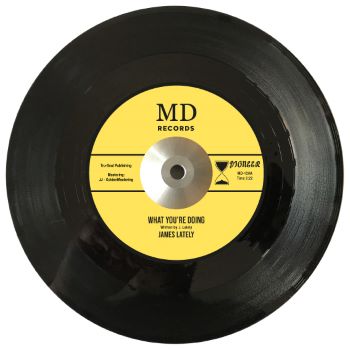 Boutique soul label MD RECORDS have lined up the release of two tasty sevens from the vaults of Detroit’s Pioneer label – one from an almost unknown singer, the other from a legendary group.

First up there’s a 45 from soul singer JAMES LATELY – of whom not an awful lot is known. His best known record is his ultra-rare 45 ‘Love, Friends & Money’ b/w ‘Tears Running And Falling In My Eyes’. Co-written with Detroit legend Dave Hamilton, both songs were recorded for Hamilton’s Temple label in November 1964. Impossible to find now but it has been re-released and featured on CD compilations from Ace/Kent Records, who now own Dave Hamilton’s back catalogue.

The new MD release features the vocal and instrumental versions of Lately’s ‘What You’re Doing’ – a tough, and little-rough-round-the-edges soulful sound. The MD team think the recordings date from 1967  and  the gritty, urban sound would certainly back that up. Lately recordings are few and far between  but he was also a well-known soul songwriter – Johnnie Taylor and the Capitols were amongst those who recorded his songs.

Sadly, James died in June 1976 aged 37 years old. It seems  he was murdered by his girlfriend over something trivial. However, this new MD release serves as some kind of fitting tribute.

The second new MD 7” features Northern legends, THE TOMANGOES with two fine sides… the harmony ballad ‘Since You Been Gone’ and the proper stomper ‘Love’s Got A Hold On Me’.

There has always been some debate about the Tomangoea as to whether they were a “real” group or a studio creation fronted by Dusty Williams.  The MD crew are currently trying  to work out what the truth is. So far they tell us that these two “new” songs were written by Dusty Williams and date from 1967. ‘Love’s Got A Hold On Me’ is a potential Northern classic – ticking all the boxes, especially the one marked “rarity”. While  Since You Been Gone’ is just  a lovely ballad with sweet backing vocals by the Gambrells; Sharon and Sandra Gambrell plus Pat Hunt.