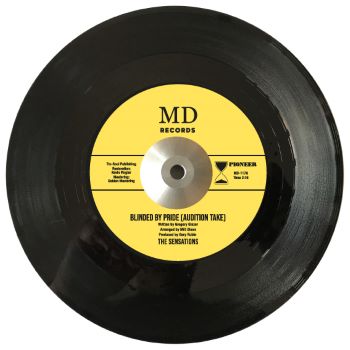 There has been a number of groups called the Sensations; the ones on the new MD release hailed from Detroit. Originally called the “New Sensations”, they comprised Jack Weiner, Gregory Glazer, Richard Berk and Lawrence Bliss. Detroit, of course, meant Motown and indeed lead singer Glazer auditioned for Motown aged just 13. We believe he was offered a contract by Berry Gordy but his mother talked him out of signing… what kind of career is music for a hard working boy, she said!

Undeterred, Glazer and his pals continued to rehearse and eventually plucked up the courage to audition for  Gary Rubin and Alan Sussman who ran the local Pioneer Recording Studio. Now just called The Sensations, the boys performed two Glazer-penned songs, ‘Blinded By Pride’ and ‘I Found A Love’. Impressed, Rubin signed them to his Pioneer label and went into United Sound Studio to record the music tracks for the songs. He used the famous Detroit Symphony Orchestra to lay down the music but when it came to over dubbing the original Pioneer-recorded group vocals there was a disparity in the tempos and sadly the record  was shelved.

Glazer wrote more songs for the group and on the strength of his ‘Clean Up The Attic’, he was invited to join a “bigger” local outfit, Soul Sextet (later known as Tribal Sinfonia). Now leaderless, the Sensations folded and that, it seems, was that.

However, fast forward and step in MD Records who, after hearing the tracks, saw a lot of potential. They quickly drafted in Argentinean mod, muso KEVIN FINGIER to clean up the tapes and equalize matters. The two songs were completely remastered and now form both sides of a brand new MD 7”.

So for the very first time we all can enjoy the Sensations’ 1966 recordings ‘Blinded By Pride’ and ‘I Found A Love’ in all their glory! Important too, to know that the MD release has been supported by Pioneer’s Gary Rubin and Greg Glazer’s son & daughter, Sarah and Dan Glazer.

The second new MD release features THE NEW LOVES… local contemporaries of the Sensations. Their line up was James (Jemy) Cheers, Robert (Bobby) Franklin Jnr., Sharon Gambrell, Sandra Gambrell and Pat Hunt. Before becoming the New Loves, the three girls had been in their own group, The Gambrells and had worked with Ollie McLaughlin at his Carla label. There they cut a couple of sides but Ollie was at that time focused on the Capitols and Deon Jackson (the Gambrell girls sang the bvs on Jackson’s lovely ‘Love Makes The World Go Round’ by the way) and their recordings were neglected .

Pioneer’s  Gary Rubin liked the Gambrells and he also had a soft spot for a local duo, the Famous Brothers who consisted of Bobby Franklin and Jemy Cheers. Rubin hit on the idea of combining the two groups and thus the New Loves came into being. They recorded two songs for Rubin – ‘My Heart Is Suffering Baby’ and  ‘Paradise Of Love’ and it’s those two tunes that feature on the MD disc. As far as the MD people know those two tracks are the only extant New Loves’ recordings. They were never promoted. James and Bobby eventually went off to fight in Vietnam and the girls drifted out of the business after releasing a couple of unsuccessful singles. We believe that the the three ladies are all still alive. Sadly, Bobby and Jemy passed in 2020.

Both these new MD singles are fine examples of mid 60s Detroit  group soul and in remastering , the engineers have captured  all the atmosphere and excitement of young musicians and singers working in the studio to find that elusive hit. Sadly the hits never came but both these discs are intriguing parts of the complex Detroit soul story. Find out more @ https://www.mdrecords.co.uk/