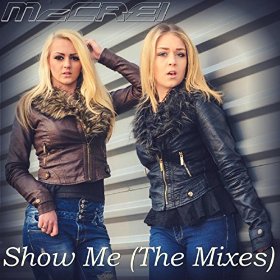 One of the year’s most deserved UK soul hits has been ‘Show Me’ from MCREI. By know you’ll know that McCrei are true soul sisters – Leanne and Shannon McCree who served their musical apprenticeship in and around the vibrant Camden live circuit.

Some months back their easy on the ear dance tune ‘Show Me’ was picked up by DSG Records who commissioned master mixer Nigel Lowis to tweak it and the finished cut – best described as “modern retro” stormed the soul charts… #1 on the Amazon chart; #5 on the Sweet rhythms chart; and a top ten on the official UK soul chart.

To give the song longer legs two brand-new mixes are about to be unleashed. First up there’s the “Classic Dig Mix” which almost takes the cut into soulful house territory; then there’s the “Groove Disco Re-Work” and, really, that titling says it all…. it really is a groove heavy, dancer; light and sophisticated, it has the potential to be one of this summer’s true anthems.

Both new mixes of ‘Show Me’ are out on DSG Records on July 6th.