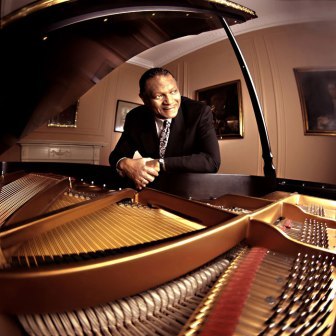 Jazz pianist McCOY TYNER died yesterday, 6th March in New Jersey. He was 81 and the news of his death was announced by his nephew Colby Tyner.

Alfred McCoy Tyner was born on December 1938 in Philadelphia, and as a child was encouraged to take up piano by his mother. When he was 17, he converted to Islam through the Ahmadiyya Muslim Community and changed his name to Sulieman Saudi. In 1960, Tyner joined the Benny Golson group but six months later, he joined the John Coltrane quartet. They worked together till 1965 – recording classic albums like, ‘Live at Birdland’ and ‘A Love Supreme’; during his time with Coltrane, Tyner also recorded solo for the Impulse label, but “officially went solo” (leading his trio) in 1966 after becoming disillusioned with the direction of Coltrane’s music.

Tyner went on to record a series of acclaimed LPs for Blue Note, Milestone, Impulse and Telarc working with people like Hubert Laws and Billy Cobham.

On a personal note, Tyner recorded one of my favourite albums of all time across any genre…’What The World Need Now… The Music Of Burt Bacharach’. Released on Impulse in 1997 and produced by Tony Lipuma, it features incomparable jazz versions of 9 Bacharach classics. Tyner is supported by bassist Christian McBride, drummer Lewis Nash and an unnamed “symphony orchestra”. Phyllis Hyman fans will also have fond memories of Tyner’s collaborations with the diva.

Interestingly, too, Tyner was the older brother of Jarvis Tyner, former executive vice chairman of the Communist Party USA.