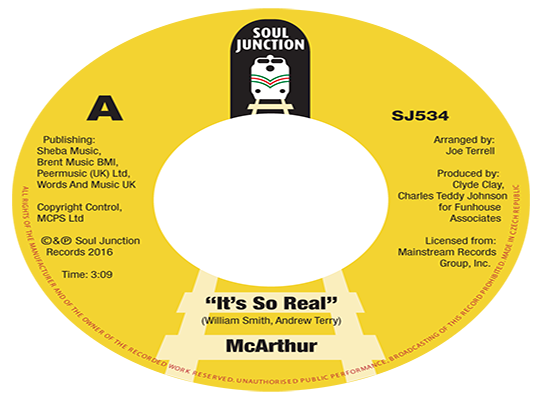 When it comes to obscure soul reissues none can be more obscure than the latest release on ever-dependable Soul Junction Records.

Their new 45 features a male vocal quartet called McARTHUR, who were fronted by Willie Cornelius Jones. Willie had previously been in the Royal Jokers and the 21st Century but in 1974 he created McArthur, named for the World War II general! The quartet only lasted for 18 months and they cut just one record, ‘It’s So Real’/’I’ll Never Trust Love Again’, for the Mainstream subsidiary, Brown Dog.

Though Mainstream was a New York label, their record was cut in Detroit and soul anoraks will notice the name of legendary sax man Andrew “Mike” Terry on the writing credits of the putative A side, ‘It’s So Real’. The tune’s a soulful, harmonic ballad with sweet strings (from the Detroit Symphony) and a glorious heart-wrenching mild piece monologue. ‘I’ll Never Trust Love Again’ is another ballad… a bit more sombre, and a lot more dramatic.

The original Brown Dog 45 is currently getting lots of attention and commanding big bucks…. now, thanks to Soul Junction all proper soul fans can enjoy it without the eye-watering price tag!