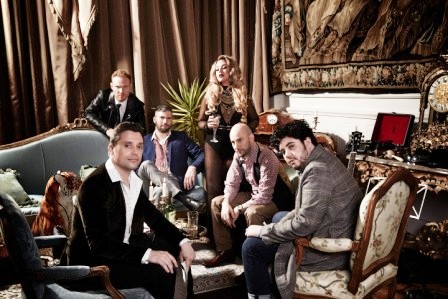 Back in 2016 we introduced you to a UK soul band named for soul’s gentle genius…. MAYFIELD. Now we’ve discovered there’s another outfit using the same evocative name. This second Mayfield is an Australian sextet (based in Melbourne) who began by playing covers of dear old Curtis tunes. From there they graduated to performing their own music, though naturally the shadow of the great man was/is always there.

The band are currently gigging hard, promoting their latest album, ‘Victim Of Circumstance’ – a tough, uncompromising 12 tracker that has already won airplay from the likes of Craig Charles.

Easy to hear why it’s has impressed CC….. Mayfield’s music is for real and totally organic (a quality that drummer/producer Ivan “Choi” Katchoyan perfected with his “other band”, Cookin’ on 3 Burners.

In places you can hear the influences of the band’s hero. On cuts like ‘You Can’t Love Me’ and ‘My Apartment’ the guitar work and throbbing bass lines have their roots in stuff like ‘Freddie’s Dead’. Fronting these tracks is the feisty (some might say fearsome) vocals of Carla Troiano. We’re told that she’s only tiny but vocally she packs a punch. You’d be a brave man to argue with her – try ‘Fuck You And Your Happiness’ to hear what I mean. Ms. Troiano clearly takes no prisoners! She’s a little mellower on the soul groove that is ‘Mr Right Now’ while she’s at her most interesting on the semi-instrumental that is the moody ‘Weapon Down’.

Find out more about the Aussie Mayfield @ www.mayfieldofficial.com