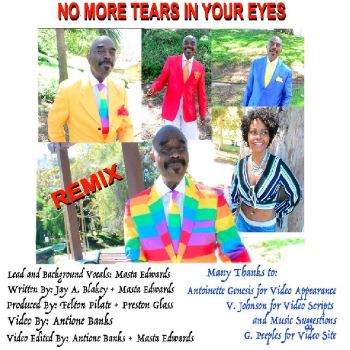 MASTA EDWARDS is a new name to us but on the strength of his latest single, a quite lovely, ‘No More Tears In Your Eyes’, we’d love to hear more.

Our sleuths have discovered that Mr E is a native of Suffolk, Virginia but as child his family moved to New York before he eventually pitched up in Los Angeles  where he’s worked in music for almost 40 years.  He’s worked as a lead vocalist, songwriter, band leader, mentor, motivator and teacher and collaborated with people like Norman Brown, Don Covay, Seal, Scott Henderson, Thelma Houston, Mandrill, Keb Mo, Preston Glass and LTD just to name a few.

Right now Masta is working with veteran vocal group, the Sly, Slick, & Wicked, but also pursuing a solo career which is set to move on up as the wonderful ‘No More Tears In Your Eyes’, gains momentum. It’s already scaling the soul charts and winning critical acclaim and easy to hear why. It’s one of those rare cuts that ticks all the boxes and it’s almost impossible to say what brings the soul magic – it just does! Look, 2023 is only a few days old, but here we have one great tune that will, for sure, be in everyone’s  end of year “best of” lists. Out now via Uniglobal Records and highly recommended!