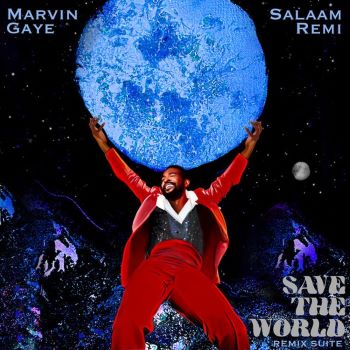 It probably hasn’t escaped your notice but 2021 has been the 50th anniversary of the release of MARVIN GAYE’S iconic album, ‘What’s Going On’ – often cited as the most complete soul album of all time and a regular item on lists of best ever albums across genres!

As part of the ongoing commemorations Motown/UMe has just released ‘Save The World: Remix Suite’ from GRAMMY®-nominated producer SaLaAM ReMi. Predictably,  ReMi says: “Marvin Gaye has been my favourite artist as his 70s LPs are unmatched as singular bodies of work. It was an honour to be able to look at the ‘What’s Going On’ LP and to be able to create a remix suite to sit next to it. This is a dream come true. LoveLiveMPG.”

Though known  for his work  with Amy Winehouse and countless collaborations with the hip-hop and R&B communities, ReMi insists he’s a soul boy at heart and a big, big fan of MPG! And as a fan, given  the ‘What’s Going On’ tapes to work on … where was he to start?  Wisely, he decided to leave the title track and focus instead on ‘Save The Children’ and the tune that was the B side to the single release of ‘Mercy, Mercy Me’ – ‘Sad Tomorrow’s’. Gaye fan will know that that song  is an early version of ‘Flying High (In the Friendly Sky)’. On both, ReMi delivers tasteful, timeless mixes.

The third track on the remix set is the timely ‘I Want to Come Home for Christmas’. This song dates from 1972 and, co-written with Forest Hairston, it tells the harrowing but poignant tale of a prisoner of war (Vietnam?) longing to get home for Christmas. Sonically it proffers all the layered atmosphere of the ‘What’s Going On’ album’. The song was first released in 1990 on a Gaye compilation and it fits perfectly into this remix suite.

The fourth track on ‘Save The World: Remix Suite’ is the one that should get the Gaye fans excited as it’s never been officially released. It’s the instrumental, ‘No Need’ which was recorded at the ‘Sad Tomorrows’ sessions. Lush and symphonic, it picks up many of the musical motifs used on ‘What’s Going On’.

ReMi takes no liberties with the remixes. Respecting the integrity of the originals, natural rhythms and grooves are stressed, the impassioned vocals shine through and on the instrumental the passion of the melody speaks for itself.

The remixes are good to go right now and if you want more – a date for your diary; January 28, 2022, Motown UMe will release the original ‘What’s Going On’ album in a 2LP, 180gm anniversary edition, with the main album mastered from analogue for the first time since its original release, and an additional disc including all mono single mixes plus four rare cuts making their vinyl debut.