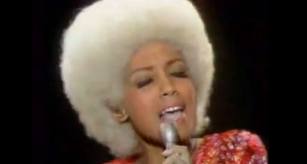 On Christmas eve, SJF is very sad to report the death of legendary soul and funk singer, MARVA WHITNEY (1944-2012), which was announced by her family on her Facebook page last night.

SJF’s Charles Waring had a close association with the Kansas singer and worked with her for several years on her yet-to-be-published autobiography, ‘God, The Devil & James Brown: Memoirs Of A Funky Diva.’

Born in Kansas City, Marva began singing in church before joining local band, Tommy & The Derbies. She was brought to the attention of James Brown in the spring of 1967 after an audition with Brown’s then band leader, Alfred ‘Pee Wee’ Ellis. She cut a slew of singles for the Cincinnati-based King label (and a couple for its subsidiary, Federal) and three albums, one of which ‘I Sing Soul With James Brown’ – regarded as the Holy Grail in the eyes of funk fans – remains unreleased. She had US R&B chart entries with three songs – ‘It’s My Thing,’ ‘Things Got To Get Better (Get Together),’ and ‘I Made A Mistake Because It’s Only You,’ all helmed by James Brown. Another of her early funk 45s for King, 1968’s ‘Unwind Yourself,’ has the distinction of being sampled numerous times and was used on Chad Jackson’s 1990 smash, ‘Hear The Drummer (Get Wicked).’

Marva quit Brown’s volatile soul revue at the end of 1969 but continued to record for a while for her then-husband’s Kansas-based label, Forte. After many fallow years – during which she continued to perform on her local gospel music scene – she made a triumphant return to the music world in 2004 as part of the German Soulpower-based stable of acts run by DJ Pari. As well as touring all over the world – and frequently visiting the UK – she recorded a critically acclaimed album called ‘I Am What I Am’ in 2007. After a stroke during a short tour of Australia in 2009, Marva had battled with her health and sadly passed away from pneumonia at her home in Kansas on December 22nd 2012. She was 68.

SJF’s thoughts are with Marva’s family.