MARVA, GOD, THE DEVIL… AND JB! 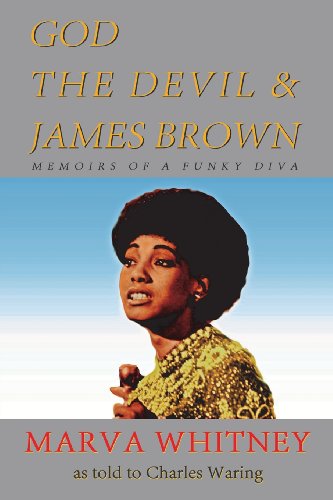 Funk fans everywhere will tell you that MARVA WHITNEY was the rawest, baddest funk-sister of them all. Born MARVA ANN MANNING in 1944, she began her musical career in the church and aged just 16 she joined the ALMA WHITNEY singers. Soon she heard the call of the Devil’s music and she began singing in local clubs to augment her weekly wage from the Kansas City clothing factory where she worked.

After spells with local groups, in 1967 MARVA joined the JAMES BROWN REVUE. She toured extensively with the GODFATHER and released a number of singles on King. In 1970, prompted by the unrelenting workload of being with the BROWN show and his authoritarian attitude MARVA decided to take more control of her own life. She quit the JAMES BROWN REVUE, got married and signed with the ISLEY BROTHERS T-Neck label. Success was hard to come by so she retired from music but by the 80s she was back – and performing with more disillusioned JAMES BROWN alumni…. notably MACEO PARKER, FRED WESLEY, and LYN COLLINS.

In 2006 MARVA worked with German music entrepreneur DJ PARI and the Japanese funkateers, OSAKA MONAURAIL on the single ‘I Am What I Am’ – a great throwback to the classic funk heyday. An album and tours followed and at last she was enjoying the acclaim and status that her fiery, funky soulful delivery deserved. Then, sadly, in 2009 she suffered a stroke while performing in Australia. She made a partial recovery but tragically died in December 2012 from complications caused by pneumonia.

MARVA WHITNEY’S story is a moving one – a story that typifies the highs and lows in the lives of so many soul and funk singers … and now you can read the whole torrid tale in a new warts-‘n’-all autobiography -‘ GOD, THE DEVIL & JAMES BROWN’.

Co-authored with CHARLES WARING – one of the UK’s most respected soul writers and partner in www.soulandjazzandfunk.com – ‘GOD, THE DEVIL & JAMES BROWN’ is written and presented in the same robust style that made MARVA WHITNEY such a force in the funk firmament. It’s raw, unbridled, intense and, above all, profoundly passionate. The memoir is unrelentingly candid and mixes pathos with humour. It vividly recalls her rise to fame in JAMES BROWN’S REVUE – pulling no punches about his tyrannical regime. The book also chronicles MARVA’S life either side of her time with the ‘GODFATHER OF SOUL’ and includes recollections from funk legends BOOTSY COLLINS, PEE WEE ELLIS and FRED WESLEY.

‘GOD, THE DEVIL & JAMES BROWN – by MARVA WHITNEY and CHARLES WARING is out now. Published by BANK HOUSE BOOKS, it costs £15 and is available directly from Amazon.